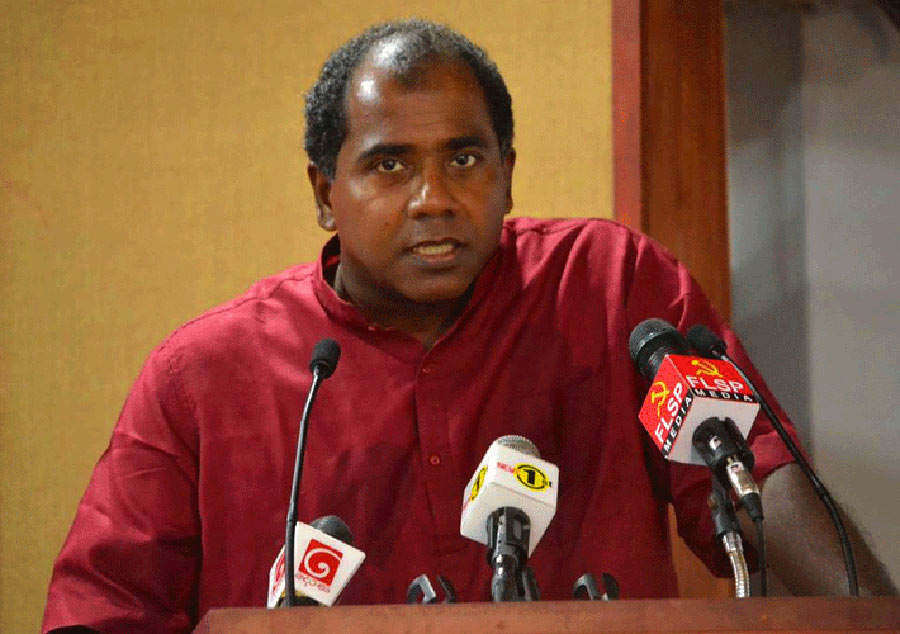 “Sri Lanka today also faces two dangers in relation to the deflationary global economy. First, the danger of a foolish move by the Government to open up trade, precisely when there is over production and falling prices in the global market that could undermine production within the country. The other danger is the increasingly xenophobic and chauvinistic mobilisations by the remnants of the Rajapaksa regime capitalising on our economic woes and linking it to fears about trade liberalisation. The political damage of the latter can be as deadly as the economic damage of the former. It was just a few years back that the Rajapaksa regime, to deflect attention from its economic failures, encouraged attacks on Muslim businesses and polarised the country.”

Part of the blame for the present crisis should go to the Western powers – the US, the Europeans led by Germany and their agents the IMF and World Bank– who are the economic policemen of the world. Despite the severity of the crisis of 2008 they stuck to their neoliberal ideology and continued on the path of austerity as they have remained loyal to their true masters called finance capital; the investment and commercial banks, the mutual and hedge funds, and all those who sit in Wall Street and the City in London. They did not even consider a serious economic solution, which would have involved the reversal of the process of financialisation and initiatea process of growth with jobs through productive investment by the state.Instead consumption and speculative investment through expansion of private debt was encouraged, which has fizzled out sooner than expected.

In any event, there is no easy solution to the global economic crisis. This is not a crisis that began in 2008 but is a continuation of the crisis from the mid-1970s. Following the two decade long global economic boom after World War II, a major economic downturn emerged explained by some economists as caused by falling profits and others as under consumption. The solution put forward in the late 1970s to that crisiswas neoliberal globalisation; it broke open the barriers to capital flows and trade, attacked the welfare state and organised labour, and privatised all services that could be, all to ensure higher profits and accumulation by finance capital. As real wages fell, working people around the world were encouraged to consume on debt and keep the wheels of the economy turning.

The alternative for capitalist revival after the Great Depression in the 1930s was much worse, it was a World War that wiped out the economies before rebuilding them. Neoliberal globalisation since the 1970s was never a solution, it merely prolonged a long crisis through repeated and deepening bouts of financial crisis, but the years of reckoning might be closer now.

Over the last decade, there was the rosy story of the Emerging Markets. There was talk of BRICS (Brazil, Russia, India, China and South Africa) and their inherent potential. Indeed, there was tremendous economic growth in those countries propelled by the inflow of capital seeking investment. However, much of that process did not escape the speculative logic of finance capital, as investment in infrastructure and real estate dominated.

China having fallen from its heavenly position with falling growth, there is now much talk about India as the new engine of Asian growth. While the levels of private financed debt as a ratio of GDP are not as high in India, it is too early to congratulate India. Less than three years ago, India was on the cusp of a banking crisis with capital flight. The point is not about China or India, it is the fragile make up of our global economic system, where having opened up all our barriers and defences, both on the borders of countries and within the national financial systems, a major crisis in one location can spread like a tsunami to another location wiping out all and sunder.

It is in such a turbulent global economy that Sri Lanka is sailing. The national crisis we are facing today will be influenced by external developments. Since the open economic reforms in the late 1970s, around the same time that neoliberal globalisation emerged, we have become increasingly susceptible to global economic forces. Yet, it is with policies of the Rajapaksa regime soon after the war that neoliberal policies centred on financialisation gained full steam.

Let us not forget, the IMF and the World Bank cheered and supported the Rajapaksa regime’s policies, with an IMF Standby Arrangement in 2009 and the World Bank considerably increasing its aid commitments. Financialised construction in urban and infrastructure development led to high growth as high as 8%, but did little for longer-term employment creating productive investment. The Rajapaksa regime for all its claims of guarding Sri Lanka’s sovereignty initiated the sale of billions of dollars in sovereign bonds. It also encouraged state banks and enterprises to borrow in capital markets abroad and continue the growth propelled by construction and consumption on debt.

As it often happens, the new Government has inherited the massive debts including the short-term commercial borrowings at high interest rates. The country is facing a balance of payments problem as imports are much higher than exports, and without new loans and falling foreign reserves, a crisis is looming. In a time of global economic crisis, such debts cannot be rolled over. We have to go with our begging bowl to the IMF, who will advise us again on the path to hell. The IMF agreement it is hoped will buy us time, perhaps the confidence and mercy of global finance capital, long enough for the winds of capital flow to help us again to roll over our debts. But the path itself is not different, this is what happened to Greece and so many other countries around the world, the IMF helped them dig deeper and deeper graves with financialised debt.

What does the Government seek to do? They are now talking about opening the other major barrier to the economy, which is trade. To seek support from India, the West and its donor agents, trade liberalisation is projected as the solution that will also increase growth and production. The economic think tanks in Colombo, with support from the World Bank and other donor agencies and committed to neoliberal policies, provide the ideological rational as they advocate a long-term transformation of the economy through opening trade. Their convoluted logic even calls for trade liberalisation in agriculture; to create a crisis in the rural economy and accelerate urbanisation.

The donor agencies have ensured there is no investment in the rural economy, even though Sri Lanka continues to import considerable agricultural and food products. The think tanks and donor agencies were silent when the Government continued with imports of luxury items including vehicles, even though that is also a reason for the balance of payments problems with increasing imports. Their commitment to open trade is such that all imports are considered welcome, and the emergent crisis is in fact seen as a further opportunity for trade liberalisation.

If financial liberalisation by the Rajapaksa regime created a serious crisis some years later, trade liberalisation by the new Government may aggravate our problems even faster given the unfavourable global conditions. While financial liberalisation drowns people in debt, trade liberalisation can directly assault people’s livelihoods and employment. It can undermine wages and labour rights as international competition creates a race to the bottom. And the timing could not be worse, when the demand for goods produced around the world is falling with the global economic crisis, opening up trade is a recipe for disaster as our little market in Sri Lanka will be flooded.

At times of global economic crisis, the worst thing that can happen is for the major economies with their large markets to turn protectionist. If the large economies close their borders, it will bring the global economy to a grinding halt. Global deflation characterised by falling prices and cheaper commodities can trigger countries to shut down their borders to protect their markets. Instead of increasing global demand and production during the time of crisis, such protectionism will deepen the crisis.There is also a political cost to deflation. Xenophobia and forces blaming outsiders for people’s economic woes and fears can create chauvinist and even fascist movements.

Sri Lanka today also faces two dangers in relation to the deflationary global economy. First, the danger of a foolish move by the Government to open up trade, precisely when there is over production and falling prices in the global market that could undermine production within the country. The other danger is the increasingly xenophobic and chauvinistic mobilisations by the remnants of the Rajapaksa regime capitalising on our economic woes and linking it to fears about trade liberalisation. The political damage of the latter can be as deadly as the economic damage of the former. It was just a few years back that the Rajapaksa regime, to deflect attention from its economic failures, encouraged attacks on Muslim businesses and polarised the country.

Opening the flood gates with ETCA

The last few weeks have seen a mounting debate on Economic and Technical Cooperation Agreement (ETCA), the proposed trade pact with India on investment and services. But what is available for critique is merely a framework, which is a commitment towards signing a more detailed trade agreement in the months ahead. That is why any discussion on ETCA cannot be limited to ETCA but has to be about trade liberalisation, including the dangers of opening the flood gates of trade liberalisation during a time of global economic crisis. Indeed, the Government claims it wants to move on further trade agreements with powers like China and the US.

India is of course very keen to have ETCA or some such agreement for the purpose of consolidating its regional hegemony. That is more for political reasons than economic reasons. Last week, the Indian Cabinet approved a US$ 700 million currency swap for up to three months or until such time as Sri Lanka signs an IMF agreement.This was followed by Sri Lanka drawing another US$ 400 million facility from India available for three months for SAARC countries. Furthermore, Sri Lanka had drawn its US$ 1.1 billion credit swap in September last year, which expired earlier this month. So, it is clear that Sri Lanka is increasingly dependent on India to strengthen its foreign reserves, and will be under considerable pressure to oblige India on the new trade pact.

While the Indian Government is interested in such a trade agreement for political reasons, once an agreement is in place, some Indian businesses may use the asymmetric power of the Indian state to aggressively move into Sri Lanka. In the modern world, the political logic of states and the economic logic of capitalist businesses work together in different ways. It is also such dynamics that might lead to the economic imperatives and fears of the Sri Lankan public being co-opted by the discredited remnants of the Rajapaksa regime.

Trade can contribute to economic growth including jobs, but it has to be timed well and part of a credible economic vision and industrial policy, which are lacking in Sri Lanka. It was greater integration with global capital markets and increased financial flows after the war encouraged by the previous regime that led to our current crisis. Similarly, opening up trade and further integration with the global market in goods and services to gain short-term support could lead to a serious crisis in a few years.

This article is based on a talk given at the Socialist Study Circle’s Left Discourse titled, ‘Sri Lanka and the Global Economy: ETCA, FDI and other options’ on 11th March 2016.